Founded in 1979 as the Thirties Society in response to the need for a conservation focus on structures built after 1914 (where the Victorian Society, founded twenty years earlier, concludes its scope),
it was re-named The Twentieth Century Society in 1992
with the broader mission to create understanding and appreciation of the best of all kinds of buildings erected in Britain in the 20th century.

To learn more about the Twentieth Century Society - www.c20society.org.uk 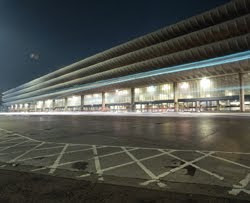 Recessions normally give breathing space to buildings threatened by development. The period up to 2008 was increasingly hectic, and post-1945 buildings were especially under threat owing to the development value of their sites.
In several cases, such as the Commonwealth Institute (RMJM, 1962) in Holland Park, buildings protected by listing suffered attrition from the concessions made by the authorities established to make this protection real.
In others, English Heritage, the government’s expert advisers on listing, recommended major civic buildings such as the Birmingham City Library (John Madin, 1974) or the Preston Bus Station (BDP, 1969) for protection, but the government refused. It was hard not to hear the developers’ money talking off stage. Both of these are large concrete structures, and both still standing in 2011, as the redevelopments proposed for their sites may or may not go ahead.
Both have become national news stories, with local defenders whose enthusiasm has provoked the standard responses of ‘brutalist monstrosity’.

Journalists are often part of the problem, since many of them only see one story where modernist heritage is concerned – the one that goes ‘these crazy people want to keep this rubbish.’ This story came out in the high-profile campaign over the Robin Hood Gardens flats in the East End of London, designed by Alison and Peter Smithson in 1968-72. The Twentieth Century Society challenged the decision not to list and has published a book recording the building and the campaign. It still stands and is fully occupied by people who enjoy living there, even though the building needs refurbishment.

Architecture of the 1920s and 1930s tends to be less problematic.
A large number of the famous London Underground stations have recently been listed, while campaigns are afoot to win lottery money for Lubetkin’s Dudley Zoo (1937) in the West Midlands.
The Twentieth Century Society has played a key role in helping both these campaigns, while continuing to run its programme of events and issue publications, including the series Twentieth Century Architects in association with RIBA Publishing, now comprising six titles since 2009 and more to come.
Публикувано от Bg - 20th Century Architecture в 1:19 PM