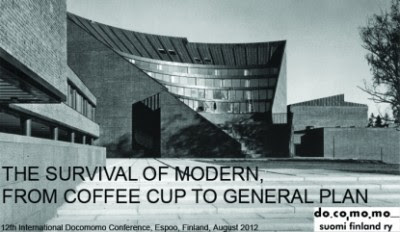 The conference will be held in cooperation
and with the support of the City of Espoo and Espoo City Museum.
http://www.docomomo-fi.com/conference2012/

Espoo is part of the greater metropolitan Helsinki area and parts of the the program are held over the capital region. The program is prepared and realized in collaboration with public and private organizations, the principal ones being the Alvar Aalto Foundation, the City of Helsinki, the Architectural Department of Aalto University, Museum of Finnish Architecture, the National Board of Antiquities, the Ministery of Environment and the Ministery of Culture and Education.

The time of the proposed conference coincides with the greater Helsinki region being the World Design Capital 2012, with numerous events and exhibitions dealing with design in all its aspects.

The proposed theme is
THE SURVIVAL OF MODERN, FROM COFFEE CUP TO GENERAL PLAN