BRUSSELS, 6 December 2010: Architecture is a key profession in reducing the effects of climate change, as energy use in buildings is one of the major producers of green house gases. Measures are needed to ensure that the current economic crisis does not lessen architects' ability to adapt to climate change. This is the main message that emerges from the Architects Council of Europe (ACE) conference held on Friday 3rd December in the European Parliament.

In their work architects have the opportunity to provide a "role model" for other citizens in sustainable development, and in involving society in the future of the planet. The Conference, held as part of the activities to mark the ACE's 20th anniversary, debated forthcoming European Directives, which could affect the course of architecture over the next ten years. This is in keeping with the ACE's belief in the importance of collaborating with the EU in the design of legislation. 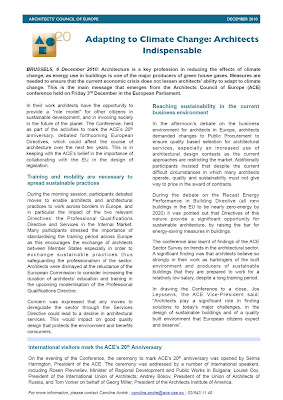 The ACE was founded in Treviso in 1990, which means that 2010 is the twentieth anniversary of the founding of the ACE. During that period the ACE has made of significant achievements and established herself as an essential interlocutor for EU policy and legislation that affects the quality of the built environment.

In order to mark this occasion, the ACE has, thanks to the generous sponsorship and support of several companies and associations, organised a series of events in the week commencing 29th of November 2010 which will allow the ACE, its delegates and other partners in the construction sector to celebrate this occasion.

The ACE has arranged for the undertaking of the 2010 Sector Study of the profession so that its results can be delivered on the occasion of the 20th Anniversary.

As a particular highlight of the events, there was a special holding of the General Assembly of the ACE in the premises of the European Parliament. The programme for that day (3rd December) was structured as a high level Conference which was addressed by a number of prominent personalities and experts.
The themes of the day addressed European level policy and legislation and was the platform through which the results of the Sector Study 2010 were presented for the first time.
Публикувано от Bg - 20th Century Architecture в 1:06 PM